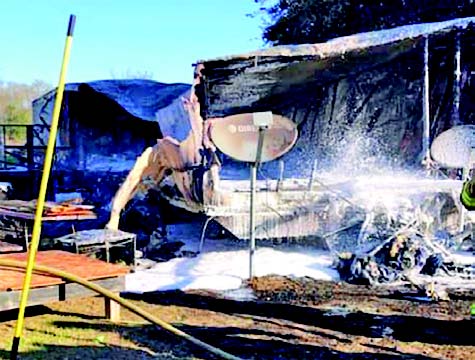 A fire likely originating in the living room area destroyed a singlewide mobile home early Thursday, Feb. 6, at 6011 County Road 252 in Tunis, but the cause remains unknown.

A man, a woman and a child got out of the house without injury before the trailer was consumed, Collins said.

Collins said he did not know the family’s name.

Collins said the fire erupted at about 7:15 a.m., and Snook and Cooks Point volunteer firefighters responded, finding the trailer fully engulfed and collapsing as they arrived.

Most of the fire was coming from the living room area, he said.

Collins said the house was already destroyed as they arrived, but they were able to save two bedrooms on the front end of the house.

The fire was contained to the trailer and did not spread to any other property, he said.

Firefighters got the blaze under control in about 30 minutes and remained on scene until about 9:30 a.m. washing down the damage, he said.

Collins said the Red Cross in Bryan was notified after the fire and asked to contact the family members.

Collins said he was unsure if the trailer and contents were insured.